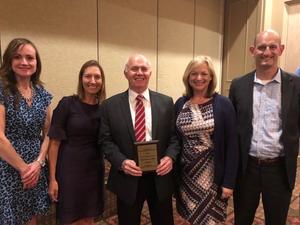 During his most recent State of the City address, Mayor DeGraw, who is 70-years-old, remarked that he has served the Grandview community for half his life, and added that that realization “is remarkable to me when I think about it.”  It is remarkable to our school district as well!

He was appointed in August 1983 to the city’s board of zoning appeals and has served in one role or another ever since.  Mayor DeGraw was first elected to City Council in 1987 and served through 1995. After a stint on the planning commission, he ran again for council and won in 1999. He then defeated the incumbent in 2003 for mayor, ran unopposed in 2007, defeated a councilman to gain a third term in 2011, and then ran unopposed again in 2015.

Mayor DeGraw has always put the citizens of Grandview Heights first, especially its’ youngest and most vulnerable citizens – our students.  Over the last six years, because of the income coming to the city from the large amount of new development, the city was finally in a position to look at expanding its’ infrastructure investment throughout the city.  Mayor DeGraw pledged to continue to make safety, especially for our children, the Number One priority, and he always appreciates the level of input from the community in helping identify issues and solutions.

Mayor DeGraw is quoted as saying, “Our proximity has always been our strength. The qualities we offer today are the same qualities this community had 30 years ago: family, closeness, schools, and safety.”

Most recently Mayor DeGraw served the schools by his active participation on the district’s Facilities Planning Process Financial Advisory Committee where he was instrumental in building a true partnership with the city to better our schools and help pass a bond levy that will generate $55.25 million to fund safety and security upgrades to all school buildings, build a new fourth through eighth grade school, and comprehensively renovate Grandview Heights High School.

Superintendent Andy Culp summed up Mayor DeGraw’s impact by saying, “His partnership, support and advocacy for Grandview Heights Schools throughout our levy and renegotiation of the Grandview Yard was remarkable!”

And, according to Board of Education Vice President Melissa Palmisciano, “Mayor Ray DeGraw is the consummate servant leader. What he has done to transform this community during his tenure as our mayor is nothing short of spectacular. The amount of time and effort he put in to supporting our district has been phenomenal. He is really a great man.”

We the Grandview Heights Schools Board of Education members are in agreement and hope that you will give Mayor Ray DeGraw your utmost consideration for this recognition.  Thank you.