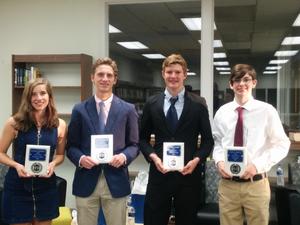 GHHS Announces One Semi-Finalist, Three Commended National Merit Scholars
Four Grandview Heights High Schools seniors have been named National Merit Scholars by the National Merit Program.
Calvin Horning is recognized as a National Merit Semi-Finalist signifying that he placed in the top 16,000 of 1.5 million scores nationally, putting him in the top one percent of all PSAT test takers in our region.
Charlie Ferguson, Liz McDermott, and Josh Roemer have been named Commended Scholars signifying that they placed in the top three percent, or top 50,000 of 1.5 million scores, in the nation.
According to the National Merit Scholarship Committee, these students represent a valuable national resource.  Recognizing their accomplishments, as well as the key role their school play in their academic development, is vital to the advancement of educational excellence in our nation.  It is the hope that this recognition will help broaden their educational opportunities and encourage them as they continue their pursuit of academic success.
"On behalf of the entire district, we couldn't be prouder of not only your academic achievements, but also for the outstanding character you all demonstrate.  Parents, we know that achievement like this doesn't just happen.  It is the culmination of intelligence, hard work, a supportive school system and, most of all, caring and dedicated parents," remarked GHHS Principal Robert Brown during a special recognition breakfast on Friday, October 4, 2019.
Pictured from left: Liz McDermott, Charlie Ferguson, Josh Roemer, and Calvin Horning.
Print