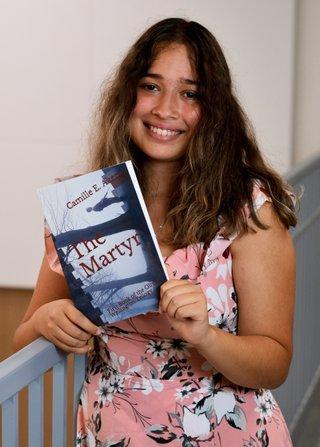 GHHS Junior Camille Akers Self Publishes First Novel in Planned Trilogy, Available on Amazon
This article is from the Tri-Village Magazine January/February 2022 Issue and is written by Megan Roth.  Portrait photo courtesy of Marc Alter.
Conceptualizing, writing and editing a book takes plenty of time, determination and energy – Grandview Heights High School junior Camille E. Akers can tell you that herself. However, thanks to modern technology and publishing outlets, becoming a published author has fewer barriers than ever.

Inspired by The Hunger Games trilogy and Kiera Cass’s The Selection series, Akers says she’s had the idea for this book since around eighth grade but hadn’t seriously attempted it until March of this year.

“I was sort of drifting away from the writing. It just wasn’t realistic for me,” Akers says. “Then, I became really close with one of my friends and he basically pushed me to just do it.”

Akers jumped in to the writing and editing process, and soon finished the manuscript and discovered Kindle Direct Publishing. After her mom, Aja Price, served as proofreader and editor, Akers published her first book.

The process didn’t come without a bit of fear, though.

“I was definitely nervous,” Akers says. “Part of me was scared that people I knew would start reading it and criticizing me.”

Akers later realized there was nothing to be scared of.

“It made me feel like I can go for what I want,” she says. “I don’t need to hold myself back if I think something is unrealistic if I know deep down that I have the ability to do it.”

Grandview Heights High School praises Akers for exemplifying the mission of the school.

“Our mission is to maximize and personalize every student’s learning,” Chief Academic Officer Angie Ullum says. “Our purpose is to provide opportunities for students to explore their passions and help them build the skills needed to initiate their dreams and follow their paths.”

GHHS offers an explore class for students to pursue their own passions. Although Akers published her book on her own, Ullum says Akers’ book is an example of the vast possibilities for students.

“Cami (Akers) publishing through Amazon is one great example of our students’ potential to follow their passions and create their own opportunities,” Ullum says.

For Akers, writing serves as an outlet to express herself.

“I journal about my thoughts and the things I see,” she says. “I like to write letters to people. It helps me tell them things I want to say. I dabble a bit in poetry.”

Outside of writing, Akers plays tennis, skis and reads. She has a passion for learning new things outside of the classroom by doing her own research on topics she finds interesting.

The Martyr is only the beginning of Akers’ three-book series. She has already begun to work on the second book. While she’s diligent about staying on top of school, Akers is always carving out time to write.

Megan Roth is an editorial assistant. Feedback welcome at feedback@cityscenemediagroup.com.