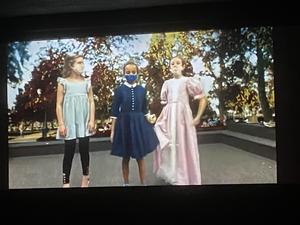 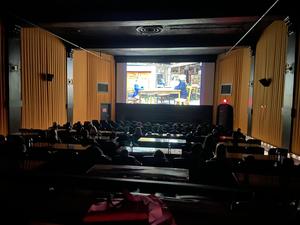 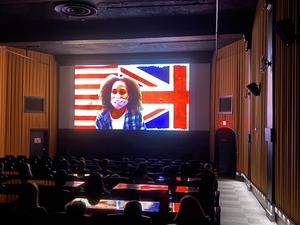 Our fourth grade students engaged in an interactive history project by planning, filming, creating, and editing videos to educate their audience about important subtopics of the Revolutionary War.  They then “premiered” their filmed projects at the Grandview Theater and Drafthouse on April 15, 2022.

The fourth grade team collaborated with Jessica Fields, Evan Heintz, Sue Umberly, Carl Acton, and Doug Page to create an interdisciplinary, project-based learning opportunity for fourth grade students to learn about the American Revolutionary War. The team worked to innovate and design a scope and sequence that would immediately engage students’ hearts and minds.

Research and planning began with a shared experience that invoked the feeling of the colonist’s original outrage to spark inquiry. Students were then tasked with the goal of investigating a musical number based on the Revolutionary War – three of which were from the hit Broadway musical Hamilton.

This investigation led to a crucial “Need to Know” list that launched our research of various subtopics our audience would need to understand in order to appreciate our musical production and learn more about the Revolutionary War. Students were given the authentic audience of the eighth grade American History students, as well as their families. They collaborated with classmates to research leading causes of the American Revolution, but more importantly their effects on our country. In order to be successful, teams needed to engage effectively in collaborative discussions by building on each other’s ideas.

Each group was responsible for researching, planning, filming, creating, and editing a video to teach their audience about their important subtopics of the Revolutionary War. We are so proud of their hard work and creativity!