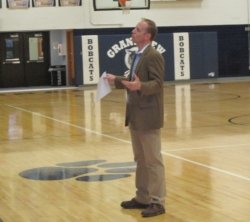 GHHS Students Gain Insights from Industry Professionals
On March 20, 2014,  GHHS students listened and learned from three local professionals about their careers in programming, psychology and architecture.
Scott Preston
Software Engineer
CodeGin
Scott Preston has done a multitude of things in his professional life.  After graduating from high school and attending The Ohio State University, he joined the U.S. Navy and studied electronics.  After serving in the Navy, he again attended The Ohio State University and earned a degree in mathematics.
After graduation, he worked as a software engineer for a variety of companies including Chase Bank and Victoria’s Secret.  In 2006 he started working full time with his own company Preston Research LLC and last year a new company CodeGin LLC, where he is focusing on Mobile & Web Development.
Scott has a robot hobby and wrote his first book The Definitive Guide to Building Java Robots  in 2005.
He also wrote  Robotics Programming 101  and helped co-author the book Real World Ajax.

Eric earned a Bachelor of Arts at Butler University and a Master of Arts and Doctor of Philosophy in School Psychology from The Ohio State University.  Eric is the school psychologist for a district in the Columbus area and serves private practice clients at Crossroads. Eric is a licensed psychologist in the State of Ohio.  He provides psychological evaluations for children, adolescents and adults.
Eric does a great job assessing, understanding and explaining the interplay between cognitive, learning and mental heath dynamics. In addition to conducting evaluations, he provides treatment services for adolescents and adults who struggle with ADHD.

Michael J. Maistros
Architect
New Avenue Architects
After completing the undergraduate architecture program at The Ohio State University with the distinction of Magna Cum Laude, Michael J. Maistros went on to graduate school, also at Ohio State, where he finished at the top of his class, awarding him the AIA Certificate of Merit along with his Masters of Architecture degree.
During this time, Michael developed his skills and passion for architecture while completing an internship at a local architecture firm in 1996. While under this employment, his experience focused on the design and development of multi-family housing, elderly housing and care facilities. Michael was also involved in the planning and design of single family homes, light commercial projects and religious complexes.
Michael earned the title of Registered Architect in 2003, and began his own practice two years later. He is currently a member of the American Institute of Architects and is certified through the National Council of Architectural Registration Boards. As a Member of New Avenue Architects & Engineers, Michael continues to expand his project experience and his passion for architecture.
Print